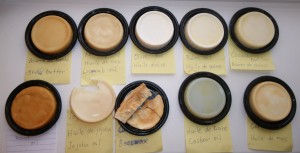 Yes, finally 🙂 Those of you who have been waiting for the results of the big test of 100% one oil soaps… here it is!

Actually, it has been more than a year since I made the soaps, but I was extremely busy moving to another country, preparing my wedding (soon…) and having holidays 🙂

You might want to read first the previous 2 posts:

To sum up – I tried to saponify different oils and found both expected and unexpected differences in trace, smell, color and foaming capabilities – these results can be found in the two posts above.

The question was, how do the soaps look like after 1 year. I was asking the following questions:

Results of one oil soap test after 15 months

In general, majority soaps have changed their color, most of them darkened considerably, some got lighter.

Castor oil soap was again a pretty special case. It got sticky and developed dreaded orange spots – sign of rancidity.

In peanut oil soap and corn oil soap, there is no doubt their color change was due to rancidity, both smell a bit like old oil. Interestingly, coconut oil soap also got rancid – changing color and smelling of old oil.

Apart of smell of rancidity (IMPORTANT – the smell of rancidity was in neither case very present, e.g. it would not keep me from using soaps) in four soaps (castor, peanut, corn and coconut), the soaps did not have special fragrance (nor the typical soap “odor”).

The only exception were shea and cocoa butter soaps, which still kept their original scent, although very fainted.

Here are the videos of foaming test after 15 months

This entry was posted by evik on August 24, 2013 at 16:44, and is filed under for beginners, My soap experiments, soapmaking. Follow any responses to this post through RSS 2.0.You can leave a response or trackback from your own site.