Formulating your own soap recipe can be tricky. There are some nice tools estimating the final soap characteristics like hardness, conditioning, bubliness, creaminess of lather like for example soapcalc.

But getting the real feel of it is an experience.

And while this estimate gives you an idea on the final soap characteristics, it won’t tell you how each oil reacts in the saponification process, what would be the color of the soap or how fast it will go rancid (although this can be estimated from the oil shelf life itself)

Therefore I decided to make a test of ten 100% one-oil soaps, to get a feeling about:

I will share with you my experience in two posts. The results are more interesting than I expected – some soaps did not behave according to estimates at all…

The one oil soap experiment set up

Table 1 shows the recipe and experimental conditions for each soap. The sodium hydroxide was calculated using SoapCalc.

Jojoba oil and beeswax are waxes and need only half of the quantity of sodium hydroxide, because they can contain 50% or more unsaponifiables.

Table 2 Summarizes how the soap behavior until trace.

Castor oil, shea butter, palm oil and beeswax traced without using blender, castor and shea tracing the fastest, followed by palm oil.
Beeswax behavior was rather strange – first it soaked in all the lye solution and then turned into very dry mass. As the temperature decreased, beeswax solidified, so I had to reheat and add more water.  Later I have read that it is better to saponify beeswax by hot process, which is of course logical – so that it does not solidify.
Why to saponify beeswax when 100% beeswax does not foam at all? You can use it as a home-made emulsifier.
Corn oil, coconut oil and peanut oil – needed blender in order to reach trace, but after it traced within seconds.
Olive oil and jojoba oil were the most difficult to trace, even with a mixer. Jojoba oil separated all the time, so I left it separated to cure.

I unmolded soaps after 24 hours. A nice adventure 🙂 Of course, I took pictures and tried soap hardness by thumb imprint before unmolding.

The softest soap was from peanut oil, the hardest was from cocoa butter.

There were significant differences in color between soaps. The best is to compare color between soaps on one photo. Also, I did not reproduce well the color on the pictures I have taken, however I did my best. Here you have a series of pictures of unmolded soaps that hopefully help you get a feeling…

As a bonus, I have made a video.

The whitest soap was the coconut oil soap, followed by castor oil soap, which was slightly translucent. Both followed by palm oil soap which was of white-creamy color, a bit more creamy were shea butter and corn oil soaps.

Olive oil soap was yellow-green and started to loose color through expanding white spots within the following days after unmolding.  After two weeks it was completely cream-white.

Cocoa butter soap kept the darker yellow color of the cocoa butter and jojoba oil soap – or rather the floating part of it – was bright yellow.

Beeswax soap was beige, interestingly, upon touch it darkened. 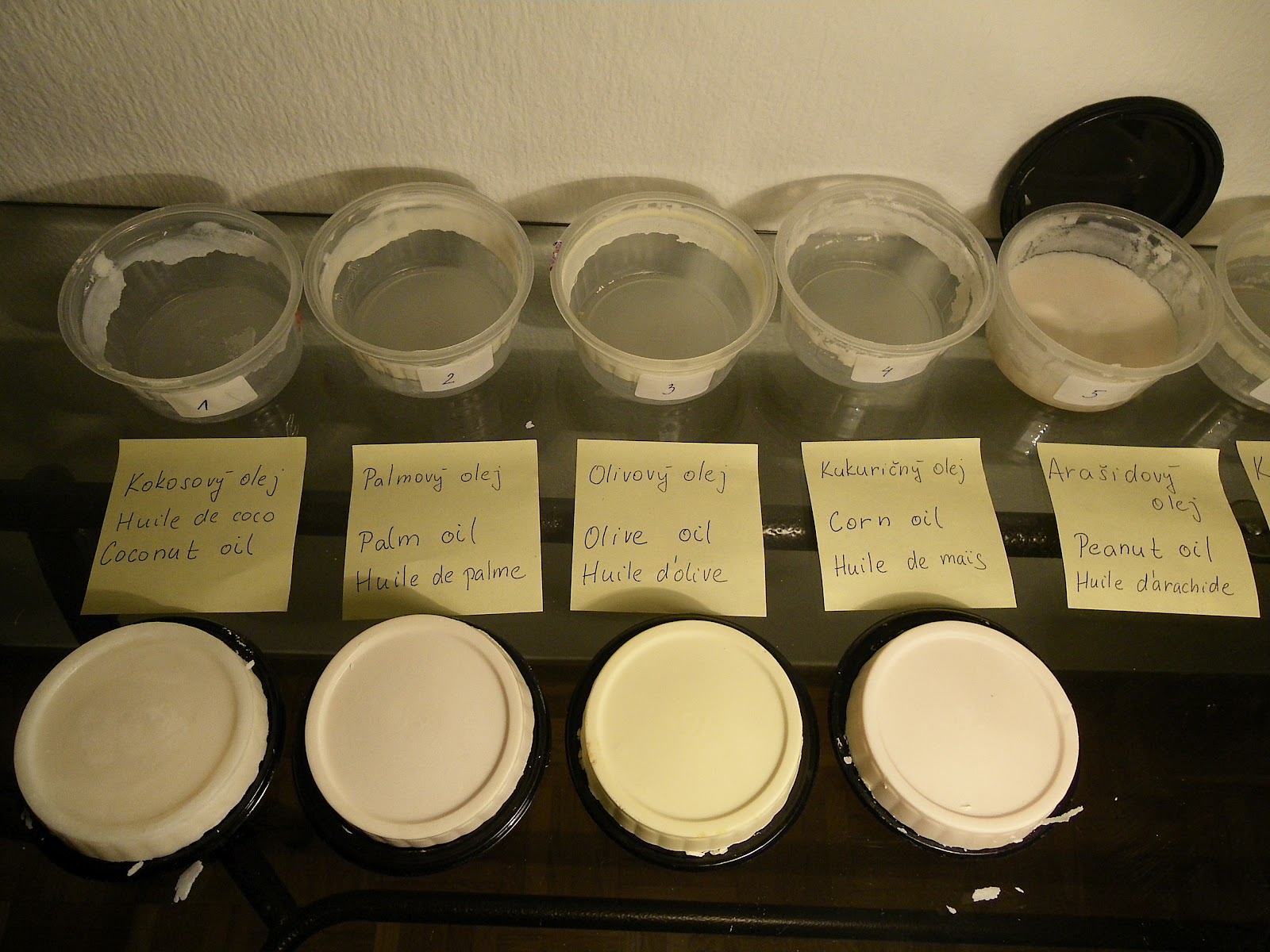 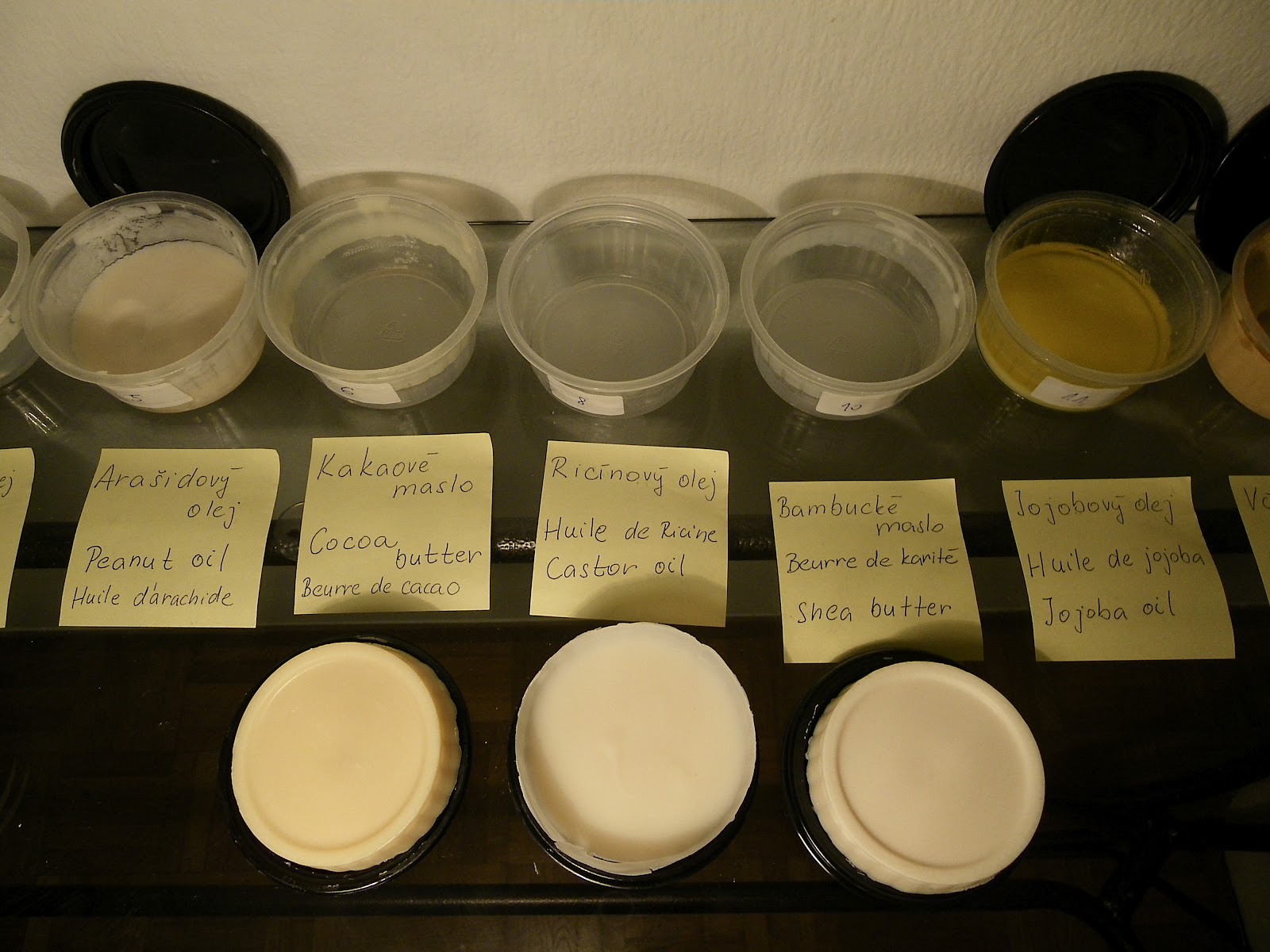 Although I could unmold the peanut oil soap  with help of freezer after 3 days, it remained very soft.

This entry was posted by evik on January 6, 2013 at 18:21, and is filed under My soap experiments, soapmaking. Follow any responses to this post through RSS 2.0.You can leave a response or trackback from your own site.