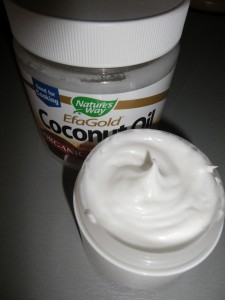 … it might be pretty confusing, right? Which one to choose in SoapCalc? And why there is so many of them! In this post I tried to gather everything (almost everything, since I forget things…) important I know about coconut oil differences.

First, let me state that coconut oil is very different from other oils, since it contains mainly medium chain fatty acids (having 12 and less carbon atoms). The composition of coconut oil is the answer behind all the questions, so let’s start with it:

The composition of coconut oil

Typical coconut oil – much as any other plant or animal based oil or fat – contains mainly fatty acids in the form of triglycerides (now if you just fainted reading these words, I strongly recommend to look them up in wikipedia – it is really important! J). These guys are reacting with NaOH and turning into soap.

The coconut oil fatty acid profile [1] looks like this:

So coconut oil contains around 93% saturated fatty acids, which means it is very resistant to oxidation and its shelf life is around 2 years (or more).

The majority of these saturated fatty acids is of medium chain length and that is why coconut oil is so different from other oils (I repeat myself here but it is really important!)

Coconut oil also contains – again similar to other oils – non-saponifiables – everything that does not saponify – usually is also good for our health. More specifically, coconut oil contains:

You probably know a difference between virgin and refined oil from the kitchen. The virgin oil is usually cold pressed, unrefined, keeps its fragrance as well as all the goodies. It is a bit more complicated for coconut oil.

If coconut oil is from copra, it is not virgin, even if it is unrefined and it has a different composition of non-saponifiables. Soooo, an oil that smells of coconut is unrefined, but doesn’t have to be virgin.

Have a look into references [1] and [2] for more info on extraction.

So… what is such an oil good for? -see Coconut oil in cosmetics below

You may have seen this in SoapCalc and you probably wondered – what the heck is this?

One can do other fancy things with coconut oil apart fractionation. For instance, you can hydrogenate it – that means you can add hydrogen atoms to the double bonds of unsaturated oils, which means you convert them to saturated. This increases the oxidation stability and at the same time the melting temperature.

Non-hydrogenated (original) coconut oil has melts at 76 °F (24°C). Hydrogenated coconut oil melts at 92°F (cca 33°C) – I read about higher temperatures, too, it seems to be connected to the level of hydrogenation.

Most often, we can find mainly the original 76 deg oil.

Coconut fat is coconut oil at its temperature below the melting point. In summer heat it quickly becomes liquid.

Coconut oil contains mainly medium chain fatty acids, which make soaps that dissolve readily in water and therefore have the best cleansing properties. They make beautiful big bubbles, and in comparison with other soaps they clean also in sea water (and hard water).

On the other hand, this is also why they do use up pretty quickly and are not resistant – if used for hand soaps, they get mushy.

When using SoapCalc, unless you are sure you have 92 deg coconut oil, select 76deg. However, it does not really matter as to the saponification value since it remains the same for both – 174g NaOH for 1000g of oil with 5% superfat. That’s because hydrogenation does not change the number of molecules in the oil, just their type.

I never tried the 92deg, but I read that it does not have an influence on the final soap properties – I would like to be corrected if you have other experience, please, leave me a comment below!

Fractionated coconut oil can be used in soap just as any other oil, but it is quite expensive. I never tried it in soap, but given the fatty acids I would expect it creates soap with a lot of bubbles and good cleaning properties. I would use around 10% to increase bubbles.

Attention! Since fractionated coconut oil is composed solely of medium chain fatty acids, it contains in 1 gram more molecules than normal coconut oil. This means we need more NaOH for its saponification. Its saponification value is 220g of NaOH for 1000g of oil (at 5% superfat).

Have a look at the results for coconut oil soap in my big test of 100% one oil soaps:

Fractionated coconut oil – what it is good for?

Coconut oil – as the only one (tested with mineral and sunflower oil) – was able to prevent protein loss both damaged and undamageed hair. This is because: „Coconut oil being a triglyceride of lauric acid (principal fatty acid), has a high affinity for hair proteins and, because of its low molecular weight and straight linear chain, is able to penetrate inside the hair shaft“

The oil was applied and left on hair for 14 hours to simulate overnight application (let’s hope shorter times are as good, since my night gets 14 hours long on very very rare occasions, and usually it is not the time I would consider having my hair „soak greasy“…).

So quick quick, ladies and gentleman, coconut grease your hair happily while you read a chapter of your favourite book in the bath, or if you have a tolerant partner, make it an overnight treatment J

Check this amazing post of Susan on oils penetrating hairs (presenting some other scientific papers).

As for the skin, it seems coconut oil is not good for acne-prone skin, since it clog pores and makes acne worse. On the other hand is nice for normal and dry skin.

I also read [now I can’t find where] that it increases the shelf life of other oils.

Coconut oil in the nutrition

… probably you know, but I have to mention it so that I don’t get lynched for forgetting it, coconut oil is very good oil for cooking.

Yes, it contains tons of saturated fatty acids, but the „good ones“, since they are medium chain acids (MCA). This means it does not increase the levels of cholesterols and it seems they have preventive effect for colon cancer.

Metabolic derivatives of MCAs (in other words what they become once we eat them) have antibacterial and antivirotic properties – thanks to their size they can penetrate protective membranes of bacterias and viruses and so destroy them. Scientists are now examining its effect in HIV treatment. But remember, you have to eat it first, therefore it is not good as preservative in your creams.

So – one coconut a day keeps doctor away! 🙂

… one could write a book about it, but I don’t have time and hey – there was at least one written already [5]…

[6] The chemistry of coconut oil.

This entry was posted by evik on April 27, 2014 at 23:44, and is filed under about ingredients, for beginners, oils. Follow any responses to this post through RSS 2.0.You can leave a response or trackback from your own site.