Who wouldn’t know the benefits of 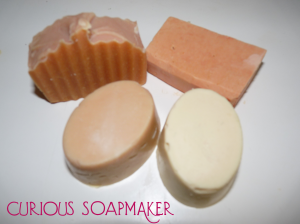 goats milk – so why destroying it by adding it to soap?

The question can be asked also from the other point of view: why not to enhance soap by adding some goat milk?

A lot of people love goat milk soap, claiming that it is the best for problematic and sensitive skin.  I have no personal experience (since my skin has no problems), so I cannot confirm, but it seems it is very pleasant to use!

Goat milk can be made using any basic soap recipe just substituting water for milk.

However, there are some tricky parts (as with any milk soap) that you should familiarize yourself with…

For instance  when you dissolve NaOH in milk:

This is why we try to keep the temperature of the lye solution as low as possible and therefore we freeze the milk before dissolving lye in it.

Another point is that thanks to sugar content milk soap heats very quickly, which means that:

When it comes to keeping milk white, it is even more difficult. There are many variables that influence soap colour, in between them:

So I decided to make an experiment and make goat milk soap from a mix of oils that together don’t give by default very white soap and tried to find out, how gel phase as well as added essential oil influence the colour. Since I knew that with cocoa butter and cinnamon oil I won’t be expecting very white soap, I also opted for adding a well known whitener: zinc oxide (ZnO) to the part of the soap. Another option is to add Ti2O (titanium dioxide).

The recipe I tried is a bit unusual (and I do not recommend it for beginners) – I used stearic acid to make the bar harder (simply because I had not much butters).

1. I melted stearic acid and cocoa butter in rice bran oil and olive oil. Note that at the temperature below 50°C stearic acid will start to solidify again. That means the soap must be mixed at 50°C –  this is a relatively high temperature for the milk soap, but I tried it.

Be sure that you dissolved all the NaOH before pouring it into the oils!

3. Then I poured lye in the oils and stirred well by hand. It thickened very quickly due to the oils (stearic acid and cocoa butter) cooling down. Also, stearic acid reacts very quickly with lye. It is important not to cease stirring – after while, the soap will thin again.

4. I added ZnO into half of the soap and blended it in with a mixer, which caused the soap to trace very fast until separation occurred – I expected this, since this soap traced already very fast hand stirring, however, blending is the only way to distribute ZnO in soap evenly. Normally, that is the reason why I would have dissolved ZnO in the milk first.

5. I spooned into smaller moulds some unscented soap (both ZnO and without ZnO) –
this way I could be sure the soaps won’t gel (also because it is colder, in the summer, they might have gelled in individual moulds, too).

6. Then, I hand stirred the EO blend to the rest of the soap (both with ZnO and without ZnO) and spooned it into my big log mould (see image below).

7. 12 hours later, I unmoulded the soaps – the non-gelled unscented ZnO soaps were too soft, so I had to freeze them prior to unmolding. 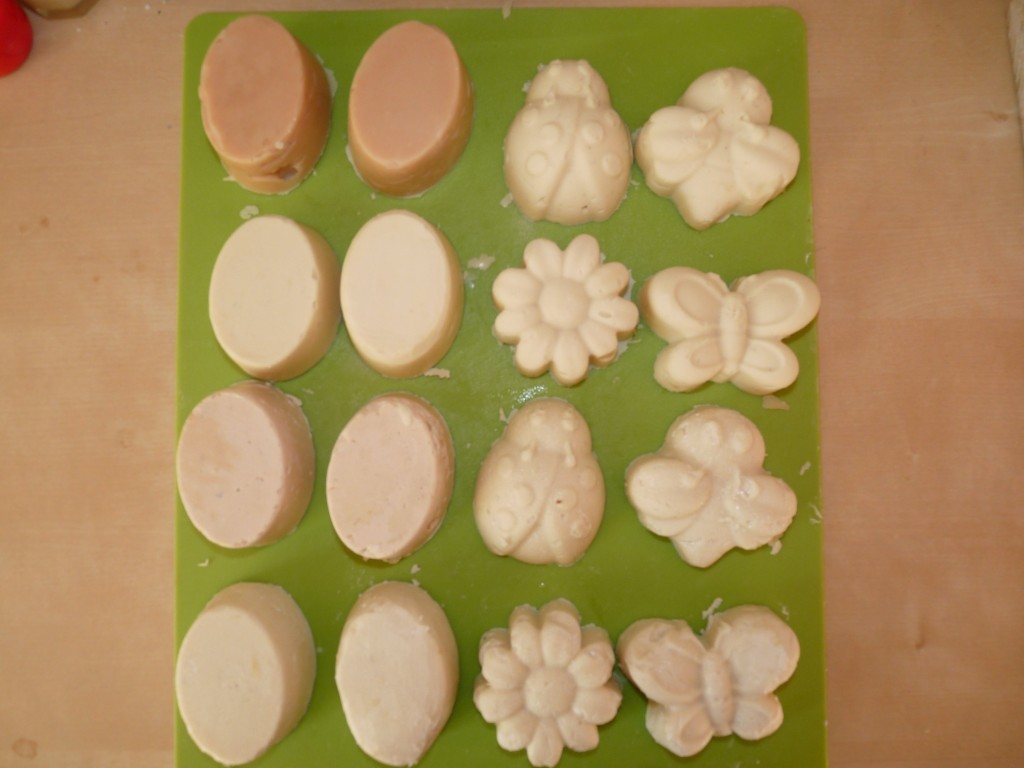 Log mould – soap gelled. Left part is with ZnO, right par without ZnO. The left part was partly separated when I spooned it into mould and due to the gel phase, part of essential oils together with some water and glycerine were pushed out of the soap – on the top as orange drops. The right part gelled evenly without separation. Note the pink colour – this is the effect of cinnamon essential oil. The left part is whiter thanks to ZnO. 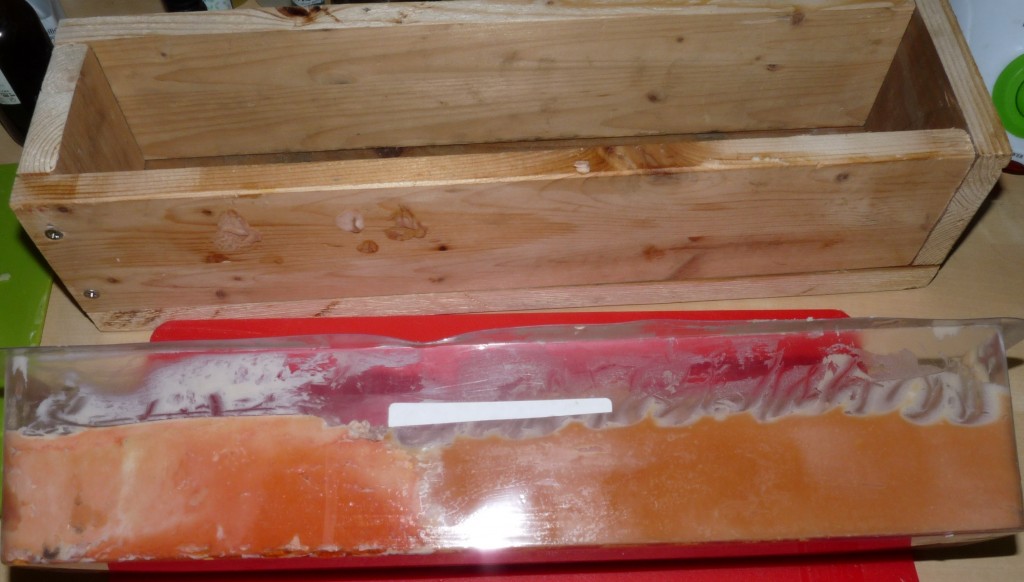 The pink can be seen also on sides 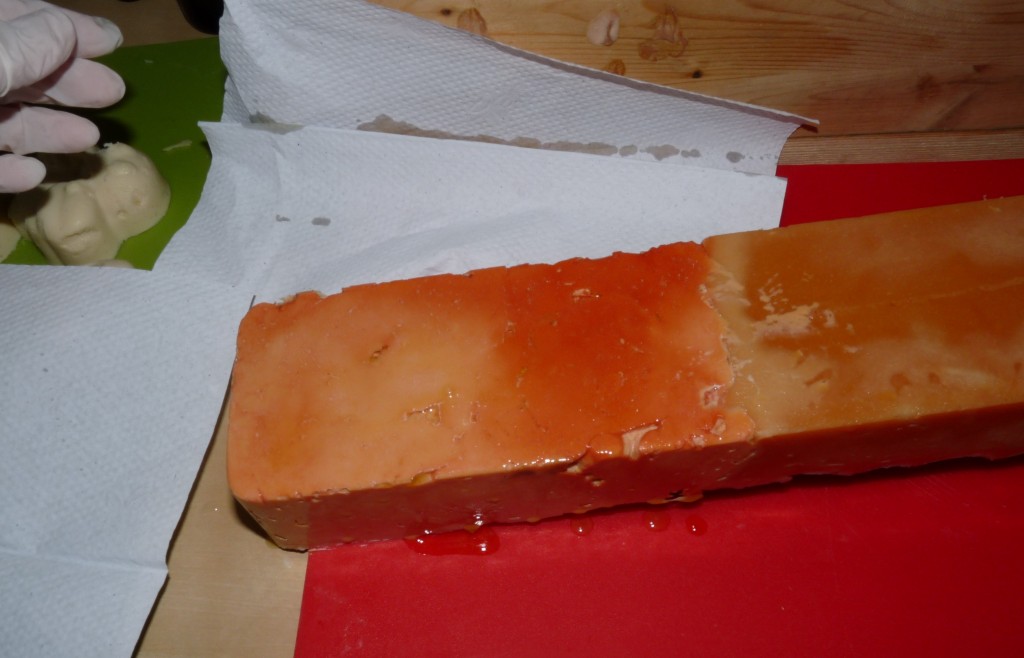 The separated liquid is not a problem and does not harm soap – simply gently remove it using a wipe.

The image below shows the difference in goat milk soap colour based on its ZnO and EO content and if it passed gel phase or not. I also added pH test! 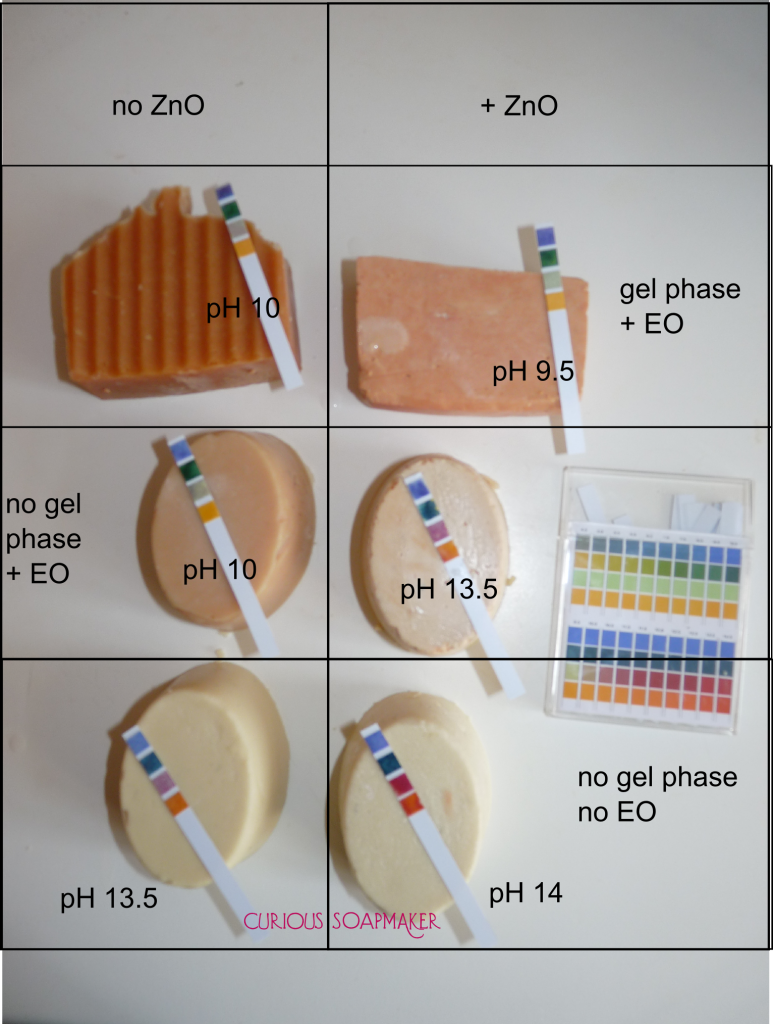 To sum up, if you wish to succeed your goat milk (or any milk) soap, and make it as white as possible:

… and do not forget you can turn almost any soap recipe into milk soap, however, bear in mind what I wrote above!

PS: There are other methods how to add milk or other diary products to soap, the two most common techniques (cold and warm – this one is cold) are described well in detail the book of Anne L. Watson: Milk Soapmaking:

Check my other posts where I use milk or other diary products in soap:

This entry was posted by evik on September 29, 2014 at 20:31, and is filed under milk soap, soap color, soap recipes, soapmaking. Follow any responses to this post through RSS 2.0.You can leave a response or trackback from your own site.