« Coconut hair conditioner
Lecithin as an emulsifier – part I, how to dissolve lecithin granules »
| Views 55750

How to make melt and pour soap base 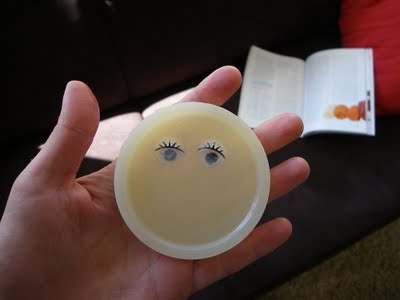 I like the advantages of melt & pour method – no alkali to deal with, we can literally make only one bar of soap, almost any colors and fragrances are stable in less quantity.

But as a soapmaker from scratch, I am not pleased with the idea to purchase a soap base! Not only that I cannot influence the compositions of oils, but also – I want to do it myself!

Surprisingly, there is not much information around about how to make a meltable soap base. You can make your own transparent soap, but problems arise when you try to remelt it and apparently with ageing of the soap it becomes even more difficult. At least this I have read.

How to make melt and pour soap base from scratch

I have found only one source discussing the preparation of meltable melt and pour soap base, just about at the time when I was trying to understand what are the special components of commercial soap bases.

So the source is http://home.earthlink.net/~skinesscentuals/Transp.html and the author don’t want to make only meltable, but a transparent meltable base!

The ingredient that makes the soap base meltable is apparently the use of propylenglycol instead of ethanol – ethanol is evaporating much faster and apparently that is why it is difficult to remelt such a soap.

So I did it and I failed making transparent soap base, but I succeeded in making the translucent meltable soap base!

However, the way to get there was somewhat difficult, mainly for two reasons:

1) I never did the hot process soap – I suggest to everyone first trying this, the experience can be very handy when proceeding to something like transparent meltable soap base
2) I did not have my book of transparent soap making (C. Failor) with me and so I did not have at hand any information about how much of solvent to add if the soap still lacks transparency at the end of the process.

Point 1) resulted in two mistakes I did and that were not mentioned in the source blog I took the information from:

– I discounted the water proportion to 2.08 times weight of NaOH – DON’T DO THAT,  ESPECIALLY WHEN YOU HAVE SMALL BATCH OF SOAP (mine was about 1kg)
– I heated my soap too much from the beginning

You can read everywhere when searching for information about the hot process soapmaking that the temperature of the soap mass should not fall below 64°C (145°F).

If you have small batch and are heating too much, the gel phase will occur, but the water is evaporating quickly. The lye than do not has the solvent and thus a little potential to saponify oils. Gel phase does not occur completely and there are parts of hard – unsaponified oils in it.
This is also why it is not a good idea to make a discount of water – not that there is not enough water but it also evaporates quickly from the small batch! Calculate your water as a percentage of your oils (38% by default in my favorite online SoapCalc calculator)

This might have been also the reason why my final soap with solvents added was not transparent (the sample on chilled glass assay). So I tried to add solvents. And here I came to problem caused by 2).

– While I was aware of the fact that the excess of sugar and glycerin might cause sweating and softness of the final soap, I tried to add mainly the propylene glycol. However… I did not know what is the minimal amount to add, so I was adding it in too large proportions and finished with an excess of propylene glycol.
Too much solvents also cause cloudiness. There is apparently a narrow interval between not enough and too much, where the transparency occurs. What I did not know neither was that propylene glycol is highly hygroscopic. That means that an excess also causes sweating and sticking of the soap.

Well, after 6 hours of adventuring this soap over the double boiler, after pouring into a plastic tupperware and letting it cool down in the freezer, I have finished with more than 1.2 kg block of soap which was:

I was not happy. So I just wanted to know whether it is at least meltable! So I did the test, I cut a small block of it, and without any problems melted down! I added a bit of fragrance and a bit of color and… to my surprise, the fragrance held and color did not disappear at all….. I did my first bar of melt and pour soap from the complete scratch and even when sticky and sweating…. I LOVED IT! See below for some pictures.

After two weeks,  I tried to remelt my base again. And I succeeded. Actually, surprisingly, the remelted sample, about 1.2 cm (0.47″) thick was relatively transparent.

If the definition of transparency is according to C. Failor: To read 14 size font across 1/4″ thick sample, than I might (maybe with a little bit of luck) have a transparent soap base, even when I did not try that thin. However, for me it is still rather translucent.

So after this batch of meltable soap which is however sticky because of the excess of the propylene glycol, I read some troubleshooting (finally I found my book of Making transparent soap etc) and decided to rebatch my base, so that it is not sticky anymore.

It took me a bit of time to calculate the excess of my solvents and the proportional actual soap I have to prepare and add to my batch in order to get still meltable (and with a little bit of luck also transparent) non-sticky and non-sweating soap base.
Here thanks a zilion for the special transparent soap calculator http://www.bearchele.com/soap/calculation.html

And moreover, at the time of rebaching I still did not know about the 1) and 2) … However, I succeeded, even when the re-batched meltable soap base is still not transparent.

Because I little bit over-complicated the whole process (being a total beginner to HP in general), I am not going to put the recipe online. However, when I will make the second one, more successful, I will put here step-by-step instructions. So far, I can only say – follow your favorite recipe for transparent soap, and exchange propylene glycol for ethanol!

Here is the transparent soap recipe and tutorial!

Did you succeed to make your own meltable melt and pour base? Share your experience, or just write me what do you thing about it in a comment!

This entry was posted by evik on January 16, 2012 at 08:02, and is filed under soap recipes, soapmaking, soapmaking techniques, soapmaking tutorials. Follow any responses to this post through RSS 2.0.You can leave a response or trackback from your own site.