« Review: All In Packaging – all you need to pack your cosmetics?
Soapmaker’s wishlist for Christmas – what to buy your beloved one! »
| Views 30055

How to make resistant soap, or hard doesn’t mean resistant! 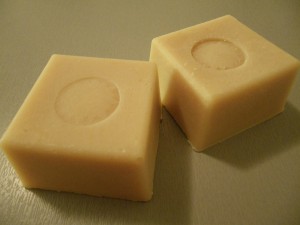 …. As the title suggests, a hard soap does not necessarily mean a resistant soap.

Hard soap means that your thumb does not leave a mark on it under substantial pressure. The soap is hard, well, almost like a stone!

So what is a resistant soap? Resistant soap dissolves relatively slowly and even if you use it often (e.g. for washing hands), it does not get soft or slurry, but still remains relatively hard.

Logically, your first thought probably is- but if the soap is rock hard, it will certainly be resistant! And that’s just the catch – not necesarilly!

Take, for instance, a soap from 100% olive oil. It is really hard, and yet it gets slimy upon usage and quite quickly uses up. Its resistance in frequent usage is therefore miserable.

Now you think – yes we know, that is because olive oil is unsaturated and these give softer soaps….  adding coconut oil to the recipe will add hardness and the problem is solved.

Yes, coconut soaps are extremely hard. But it will definitely not add a resistance to your soap! You see, coconut soap is very well soluble – it gives amazing foam even in hard water and seawater! So although it may be hard soon after the production, once it stands on your sink, with frequent use it will rapidly dissolve and – naturally – get very soft. Coconut oil soaps last much shorter than other soaps.

At this point you can see that the resistance is very much dependent on the solubility of soap. The better it dissolves, the less resistant it is. This is especially true, since homemade soap still contains glycerine, which retains water. If you use a well soluble soap very often, it has no time to dry between usages and absorbs water and gets soft, dissolving even faster…

Thus, when the hardness is not resistance, why do I still talk hardness? Because every resistant soap is hard, but not every hard soap is resistant.

The most famous calculator SoapCalc calculates “Hardness” of your soap, but  it is neither really a measure of hardness, neither of resistance – surprised?

Hardness and other properties of soaps as calculated by SoapCalc are based on automatic conversion taking into account the proportions of different fatty acids or triglycerides.

From my experience and testing of 100% one oil soaps (here, here and here), only sunflower and hemp soaps are really soft – in the sense that they are literally bendable! This is generally true for soaps with high percentage of linoleic acid.

Based on my experience, the ranking of hardness and resistance would look like this:

The soaps that are the most resistant ones are those that are the least soluble – those are soaps high in palmitic and/or stearic fatty acids. There are other factors that can make soap more soluble – I will talk about these below.

Hardness/resistance of soap and the gel phase

So resistant soap is always hard, but not vice versa. However, before you say about a soap that it is soft, you better know when to measure its hardness, or you can get very confused.

I receive many emails from unhappy soapmakers complaining that their soap is soft still the next day, despite the fact that the recipe said it will be hard and what did go wrong… I always ask – did the soap pass the gel stage?

Note that you should not measure the hardness of soap just after it passes the gel stage.  Gelled soaps are very very soft right after the gel phase and only over time get harder, and can remain rubbery/bendable for quite a long time (days to weeks, depending on the recipe).

If you want to get your soap hard as soon as possible after the gel, slip it into the freezer, that helps a lot!

If you have troubles saying if your soap gelled or not, here is a hint – did it change colour into darker hue and got a bit translucent, or cracked on the top? If yes, it gelled. Is it soft/bendable after cutting? If yes, then it gelled.

Is it “soft – hard” like butter taken from the fridge, or crumbly? Than it did not gel, but vice versa – lost its heat.

And yes – do not forget that gelled soap is a more resistant soap, too! At least according to Kevin Dunn, the very well known chemist who experiments with cold process soap making (see his excellent book Scientific Soapmaking).

What influences the resistance/solubility of soap?

The solubility (and hence resistance) of the soap depends on:

1. The oils in the recipe – the higher the percentage of oils high in palmitic and stearic acid, the more resistant – less soluble – soap. Watch for the castor oil, which also adds to the solubility, though (up to certain percentage).

2. If it passed the gel phase (see K. Dunn experiments)

4. The amount of water in soap (and hence the cure time)!  Indeed, the more water your soap contains, the less hard and resistant it is. Generally, the longer the soap cures, the more water evaporates, and the better the resistance. We have a bit of a paradox here, since the evaporation of water brings some soap better foam (such as olive oil). However, they have then more place also to absorb water, so they get less slimy. If you make a recipe with high water content (low lye concentration), it takes longer for water to evaporate. So one way to make your soap harder is to put less water in it. However – this might actually prevent your soap from gel phase, which would be pity because of the point 2… Also playing around with water proportion means you have to know what it does to your soap and this depends on many factors and what you wish to do with it. I will post about it in the future…

So if you make a soap for frequent usage which includes olive oil, coconut oil, adding a bit of castor oil, of course some honey because it’s good, so …. don’t be surprised how fast it uses up.

Of course, if you have a soap in the shower and use it only once, twice a day, it will have time to dry between the usages. In that case you will find that this article does not fit your experience. But try to use your soaps for hands, preferably in big family, of which at least two people are at home all day 🙂

This entry was posted by evik on December 1, 2015 at 09:54, and is filed under about ingredients, for beginners, soap tips & tricks, soapmaking, soapmaking techniques. Follow any responses to this post through RSS 2.0.You can leave a response or trackback from your own site.