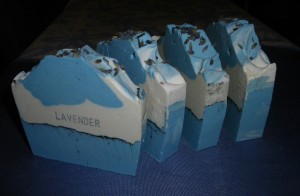 Lately, I have been out of many soapmaking oils, except for olive oil :). So I got to play around with 100% olive oil soaps and started to really like it!

100% olive oil soap can be tricky, as I already discussed in one of my previous posts – it is soooo lazy to trace, to gel, to cure and to foam, getting instantly slimy, that it might not be popular with many soapmakers.

In that post (you might want to read it first), I discuss some tricks to doctor up its (for some) unconvenient characteristics, and this is a nice example of how to combine tricks to get pretty awesome soap!

I also tried for the first time the thin powdery ornamental layer decoration.

Note, that I used 556g of water for 2 kg of oils, instead of 760g recommended by SoapCalc. This way I got  31.4% lye solution instead of 25.1% lye solution. This lower amount of water resulted in fast trace and very easy and early unmolding.

1. First, I mixed milk with water and dissolved salt in it. Then I poured milk into ice cube trays and let freeze. Once frozen, I put the milk/water cubes in the pitcher, which I put into warm water to let cubes dissolve a bit so that there is some liquid water for NaOH to start to dissolve.

2. Slowly I added NaOH to the pitcher, stirring until NaOH well dissolved. It was slow, because ice cubes dissolved very slowly. It took me around 15 minutes, at the end it looked like this: 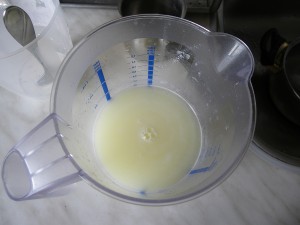 I think that when having only part of milk to substitute for your water you can first dissolve all your NaOH in the distilled water first, cool it down  and only then add frozen milk. This way it is much easier. Do not forget to dissolve salt in the water BEFORE you add your NaOH (otherwise it won’t dissolve). [I should really find a good synonym for dissolve…]

3. I poured the lye solution into the olive oil (at room temperature) and blended (hand blender) until light trace – which occurred very fast.
4. Then I added lavender essential oil and titanium dioxide with glycerine and blended very well.
5. Finally, I divided soap into two parts 1/3 and 2/3 and to the larger one added blue color and blended well.
6. In a very thick trace I poured part of the blue soap on the bottom of the mold and powdered it with the charcoal powder using a sieve.
7. Then I poured the white layer and again blue layer
8. I used a spoon to decorate the top and sprinkled over some lavender buds: 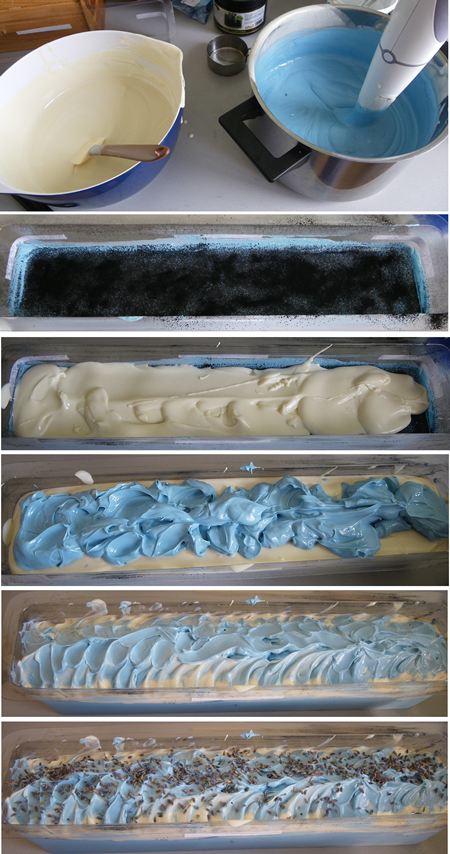 9. I was able to unmold and cut the soap 6 hours after pouring it in the molds. 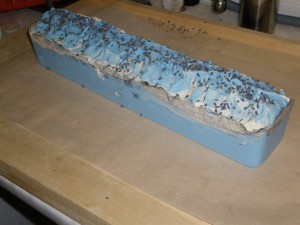 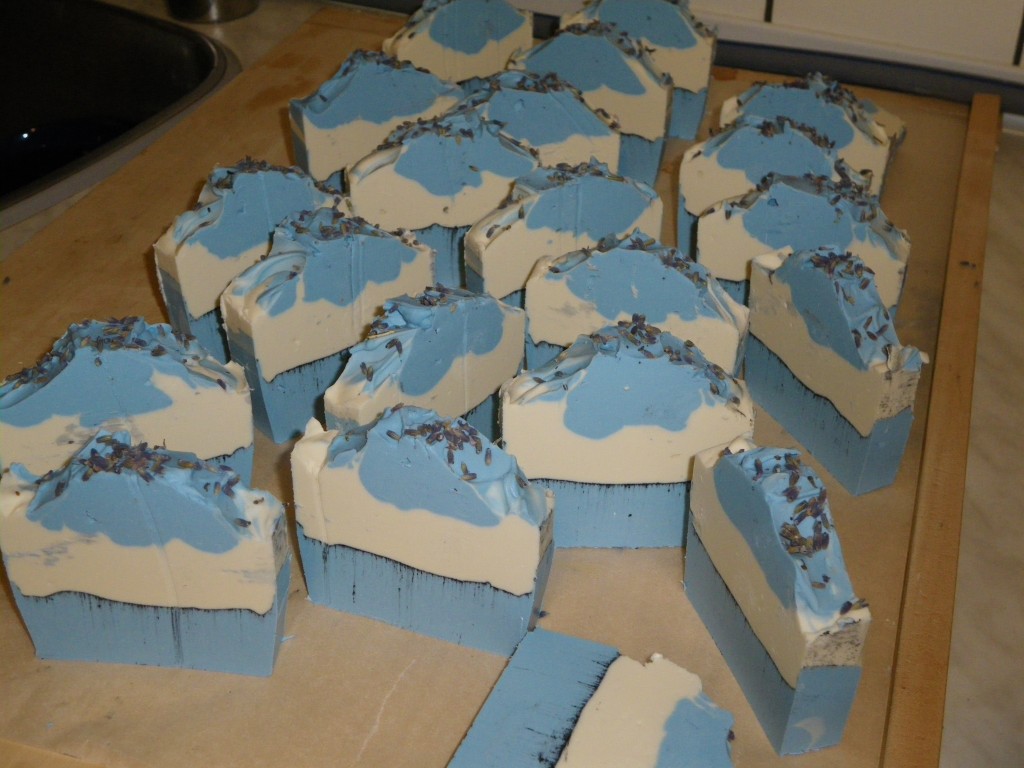 10. Finally I stamped my soaps with blue mica: 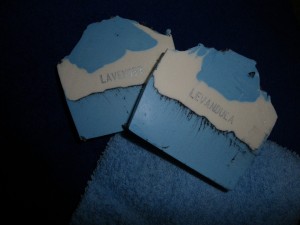 This entry was posted by evik on November 9, 2013 at 00:20, and is filed under soap recipes, soapmaking. Follow any responses to this post through RSS 2.0.You can leave a response or trackback from your own site.