It all started with one lip gloss I made. The question was – is this the best recipe? How can I know if I don’t try other… So I did some research in my books and online, plus I tried some modifications and tried two recipes I thought of myself.

I tried 8 recipes. Most of them is based on lanolin, one is lanolin-free.

Few recipes are from http://www.aroma-zone.com/aroma/recettes.asp, I tried to adjust them by using different ingredients. For example, recipe A1 uses mirroir de sucre – a special AZ ingredient based on sugar emulsifier. I substituted it for glycerine as well as for castor oil.

Then I tried to play a bit with percentages of ingredients.

To make it the most comparable possible, I tried to keep mica at the same 6% and I discarded the “fragrance” from each of the recipes.

A1 – Based on http://www.aroma-zone.com/aroma/Fiche_actif_miroirdesucre.asp#glossbrillance_abricot (A4 and C4 – substituting glycerin and castor oil for mirroir de sucre)

A2 – My recipe  (B2 the same, but substituting castor oil for glycerin)

B4 – Lip gloss 7 – from http://www.aroma-zone.com/aroma/Fiche_colorant_mica_noisette_scintillant.asp#gloss_fondant_caramel

1. I just weigh all the ingredients in a small bowl 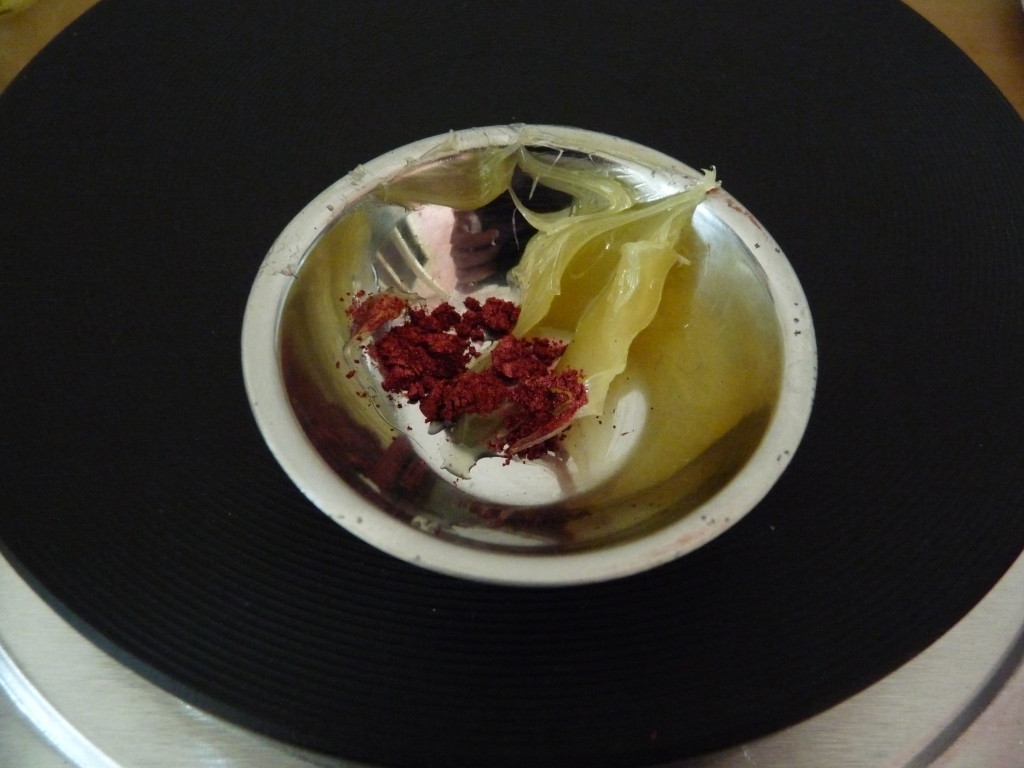 2….and heat them gently until lanolin melted down 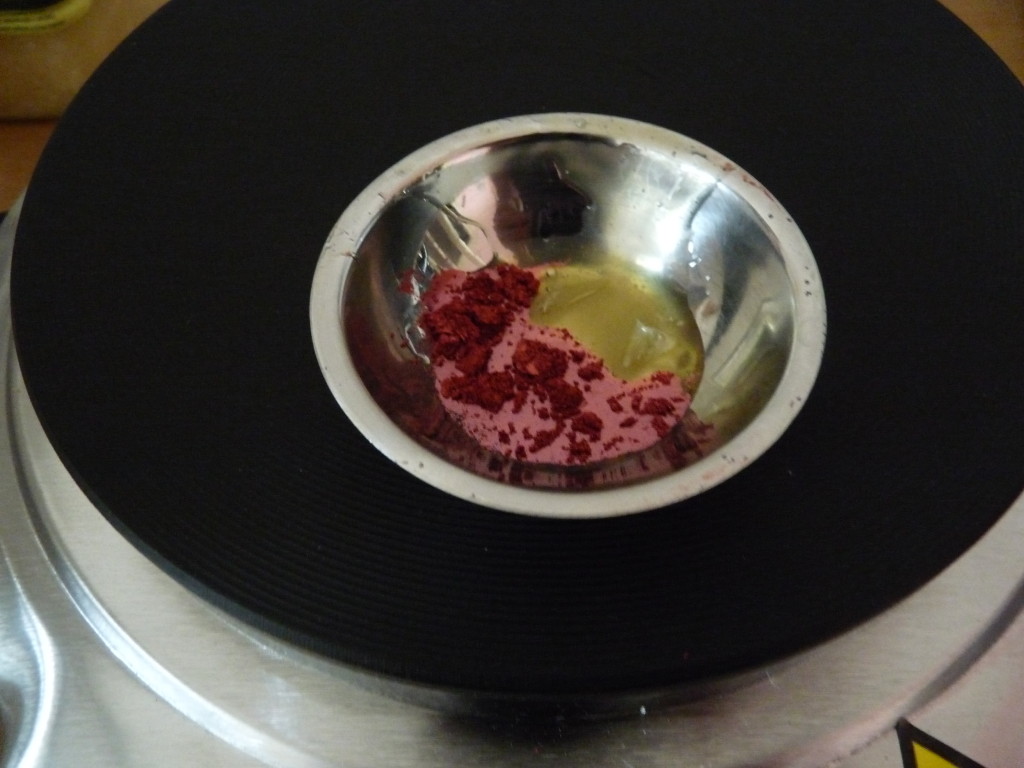 3. Then I stirred everything and poured in the recipient, let harden 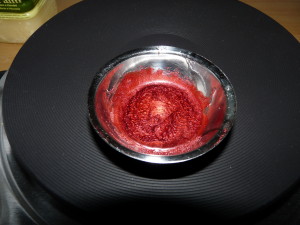 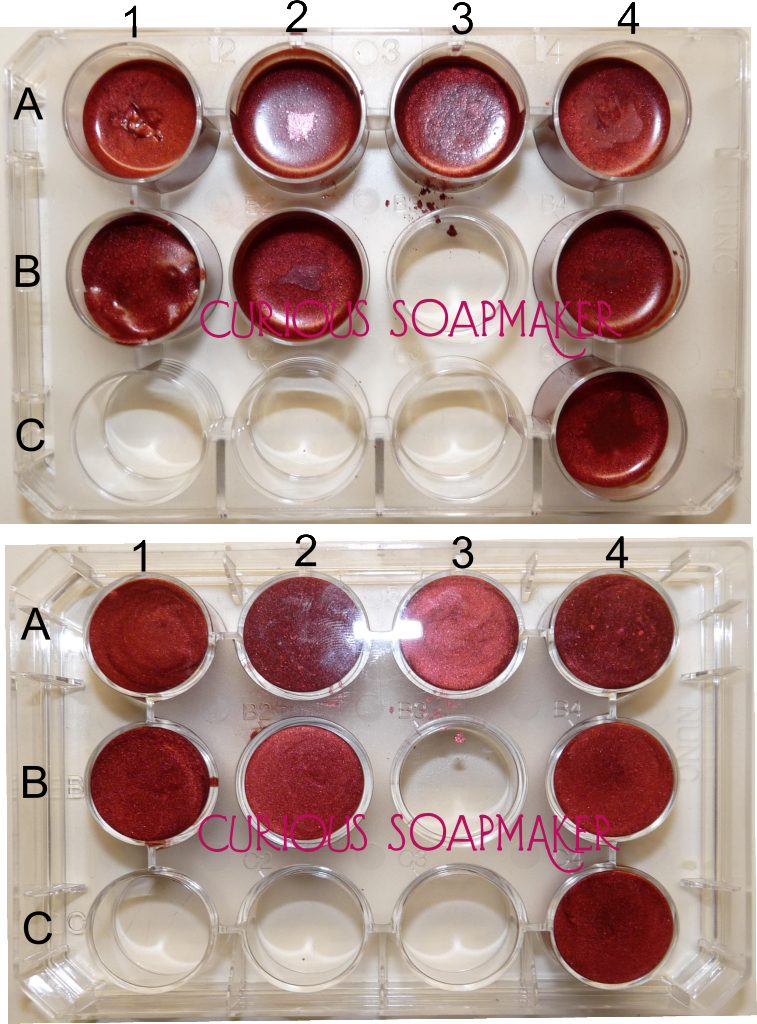 Top image: Lip glosses poured in recipients
Bottom image: the same, but picture taken from the bottom – shows that in A2 and B4, mica sinked to the bottom (darker) due to the presence of glycerin and non-presence of oils

In general, I didn’t like when gloss contained glycerin – after application, I could immediately feel its sweet taste, which is not my favourite.

Also, lip gloss recipes containing glycerin (mainly A2 and A4) had problems with mica sinking to the bottom as if mica had problems to keep dispersed (see the second image – that is the view from  the bottom –  you can see much darker lip gloss in comparison with the top image, that is due to mica sinked down).

I tested consistency by stirring as well as applying to my lips.

Here is a video of stirring, so that you get an idea:

The most liquid was the recipe from The Complete Idiot’s Guide to Making Natural Beauty Products (B1). While it was very easy to apply, it also leaked after while from my lips to my chin.

The thickest were lip glosses which contained mainly lanolin and mica (A3 and B4), and recipes containing lanolin, mica and glycerin (did not matter if 8 or 26% of glycerine) – A2 and A4. They were a bit more difficult to apply, on the other hand were sticking very well to my lips.

Somewhat less thick was the recipe containing lanolin, mica and 26% of mirroir sucre (special sugar based emulsified ingredient for lip glosses, from aroma-zone.fr) – A1

The best consistency had lip glosses with high percentage of lanolin, but containing also castor oil : B2 and C4. They were the best to apply,  while they still stick well.

Apart A1 and B1, I saw only very subtle differences, once I mixed the ingredients well (after lip gloss cooled down).

A1 was lighter red, B1 was of darker red, despite the same mica content. I believe this is due to mirroir de sucre in recipe A1 and different oils and emulsifiers in B1.

Glycerin does not help to make gloss less thick, it gives gloss a funny taste and makes mica more difficult to keep dispersed.

Castor oil – which is also very thick in comparison with other oils, almost like glycerin, does not make lip gloss taste funny, makes the gloss better spreadable and keeps mica well dispersed.

The recipe does not have to be complicated – the best recipes contained only lanolin, mica and castor oil. The percentage of castor oil did not matter much.

All of the recipes covered well. The thicker, the longer it lasted on the lips, but also the more difficult it was to apply. However, all of them, except for the too liquid one (B1) were very well usable at the end.

I will be happy to test other,  non-lanolin based recipes – please, share if you know some:)! Except for recipes with vaseline – this petrol based ingredient is not my favourite and lanolin is a much better alternative!

This entry was posted by evik on March 9, 2014 at 23:00, and is filed under cosmetics experiments, cosmetics making, face, lips. Follow any responses to this post through RSS 2.0.You can leave a response or trackback from your own site.