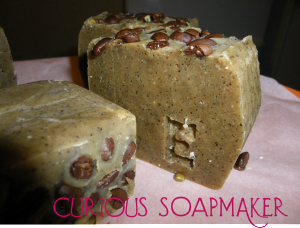 Another soap I made some time ago. It was also my first time I tried to use juice soap box for mold, as well as coffee grounds.

I wanted to make odors neutralizing soap – especially good to be used in kitchen or after cleaning or gardening.

I was inspired by a recipe from The Soapmaker’s Companion

First I prepared juice box. It is really necessary to do it before starting to make soap, just to be sure it is ready: 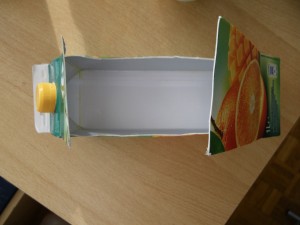 Cut one side of the juice box so that the right part forms a lid and left, shorter part can be bend inside the box to form a side wall. 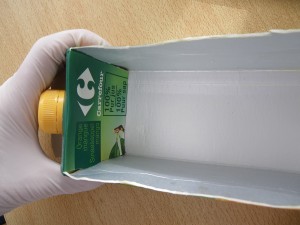 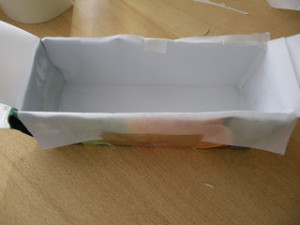 If the inside of your juice box is coated with aluminium, use baking paper to line it.

47g of dried coffee grounds (wet are much heavier)

1. I prepared my lye solution (dissolve NaOH in water).

2. At that time I didn’t know if it is better to add coffee grounds at trace or directly in the lye solution, so I added around 1/3 of it into the lye solution and the rest at trace. It might have helped release a bit of brown color to soap.

3. I melted fats with oils on very low heat (I was lazy, normally I would melt fats and add them to the oils) 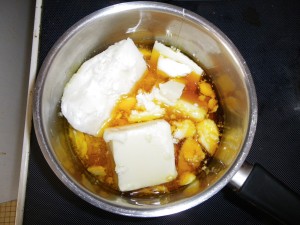 4. I poured lye to oils and blended to thicker trace. Then added coffee grounds. 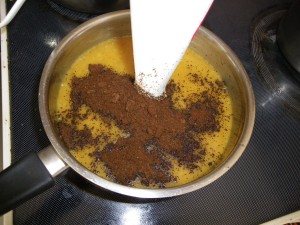 5. Finally I poured the soap in the mold – unfortunately, the juice box I used was folded, prepared to be thrown out, so the sides were damaged a bit and did not keep the form. I used plywood to reinforce the sides. 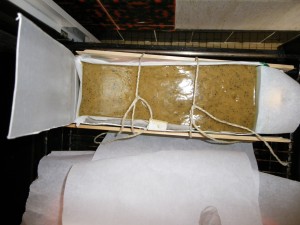 6. Finally I sprinkled the top with whole coffee beans to make it nice 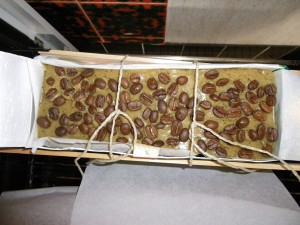 7. Finally, I put the soap in the pre-heated oven (50°C) for two hours to ensure the gel phase. This is called cold process oven process (CPOP) method. 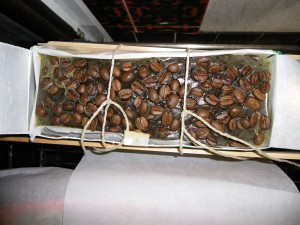 I cut the soap after 24 hours. 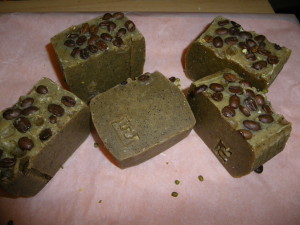 Thanks to coffee grounds the soap is quite scratchy. I was disappointed first, but then I got used to it for washing my hands.

And later, I got very positive reviews on it even for using in the shower 🙂

After all – I consider it definitely one of the best soaps I made…. which makes me think I should make one again soon.

When I published it on my slovak blog, I got some questions, so I already put here some tips:

– If you just make strong coffee and use it as part of water for dissolving lye, the soap will be still deodorizing and coffee grounds are not needed. This way the soap won’t be scratchy.

– You can use fresh ground coffee instead of coffee grounds 🙂

This entry was posted by evik on April 1, 2014 at 23:34, and is filed under soap recipes, soapmaking. Follow any responses to this post through RSS 2.0.You can leave a response or trackback from your own site.