I got an extra positive review on this rose hip soap! It foams very well, but needs to be cured for some time to gain the hardness.
In this post, you will also learn

1 tablespoon of salt – to harden soap

I used around 200 g of fresh rose hips that I gathered (last October) and boiled them in 350g distilled water. 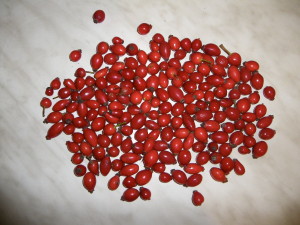 I just estimated the water amount so that it covers the rose hips in the pot.

If you wonder why I boiled them, first, I believed it is the best way how to soften the rose hips and also, that killed all possible bacteria. 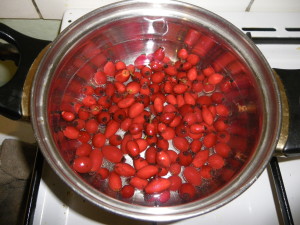 Once rose hips were cooked to soft, I blended them with the water they boiled in. 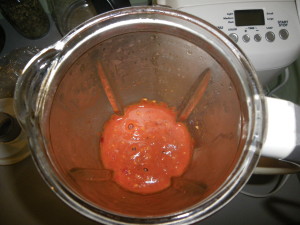 … and then I sieved the puree to separate the seeds… 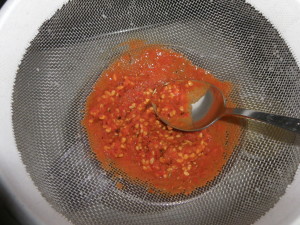 Then I added arround 150g distilled water to wash the rests of the puree from the mixer and obtained thus 686g of rose hip puree with water. 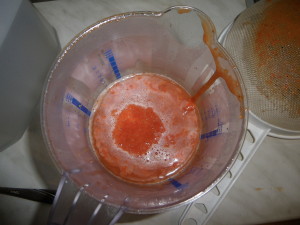 I measured 386g of this puree/solution (well, it was supposed to be 380g as is the water amount for 1kg of oils used by soapcalc, but I mismeasured). I dissolved there1 tablespoon of salt: 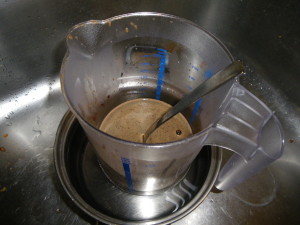 Then I added lye… the solution darkened and started to smell really bad…. 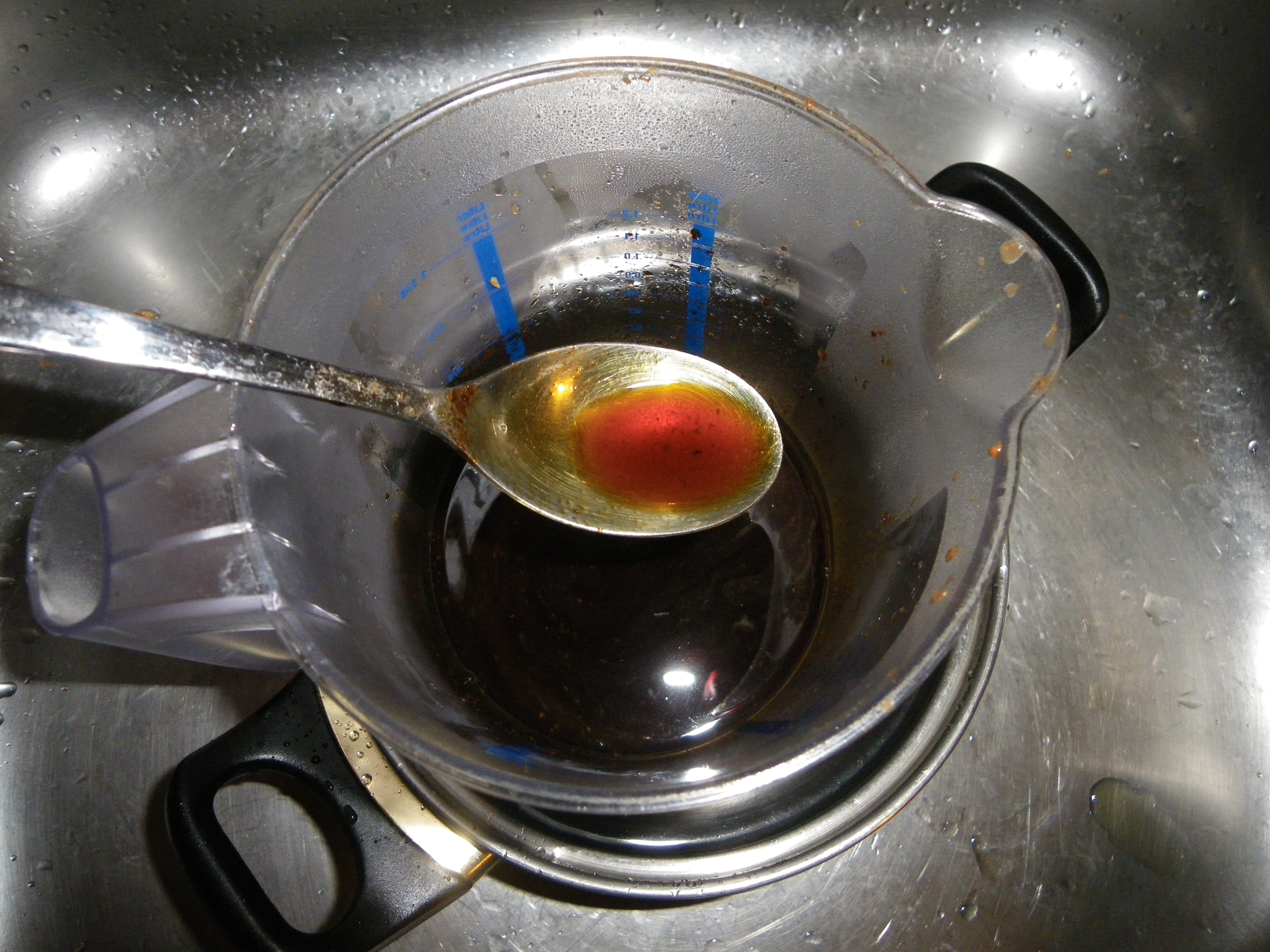 While the lye solution was cooling, I mixed my oils. 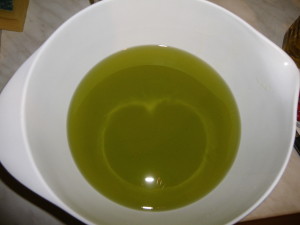 Then I added lye to oils… I was expecting orange colour and got rather brown-red colour. 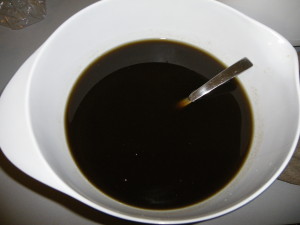 This is how it looked like after blending, in light trace. 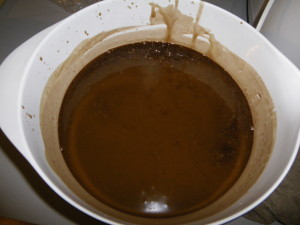 The soap didn’t want to thicken, so I added essential oil in arrow root, poured in mold and put it in the owen for 2 hours at 50°C. I wanted to start gel phase… however, I did not succeed, so I just put it on the heater. That was at 09 PM.

9:00 PM – Soap was placed on the heater
11:00 PM – Soap hardened and lightened. No gel phase apparent
8:30 AM – After 12 hours the gel phase started in the middle of the soap
9:50 AM – Gel phase was almost all over the soap except for extremities. The soap was dark brown, on the top olive-green.

I left soap all the day on the heater. In the evening, it already passed the gel phase, which means it was very dark and soft. 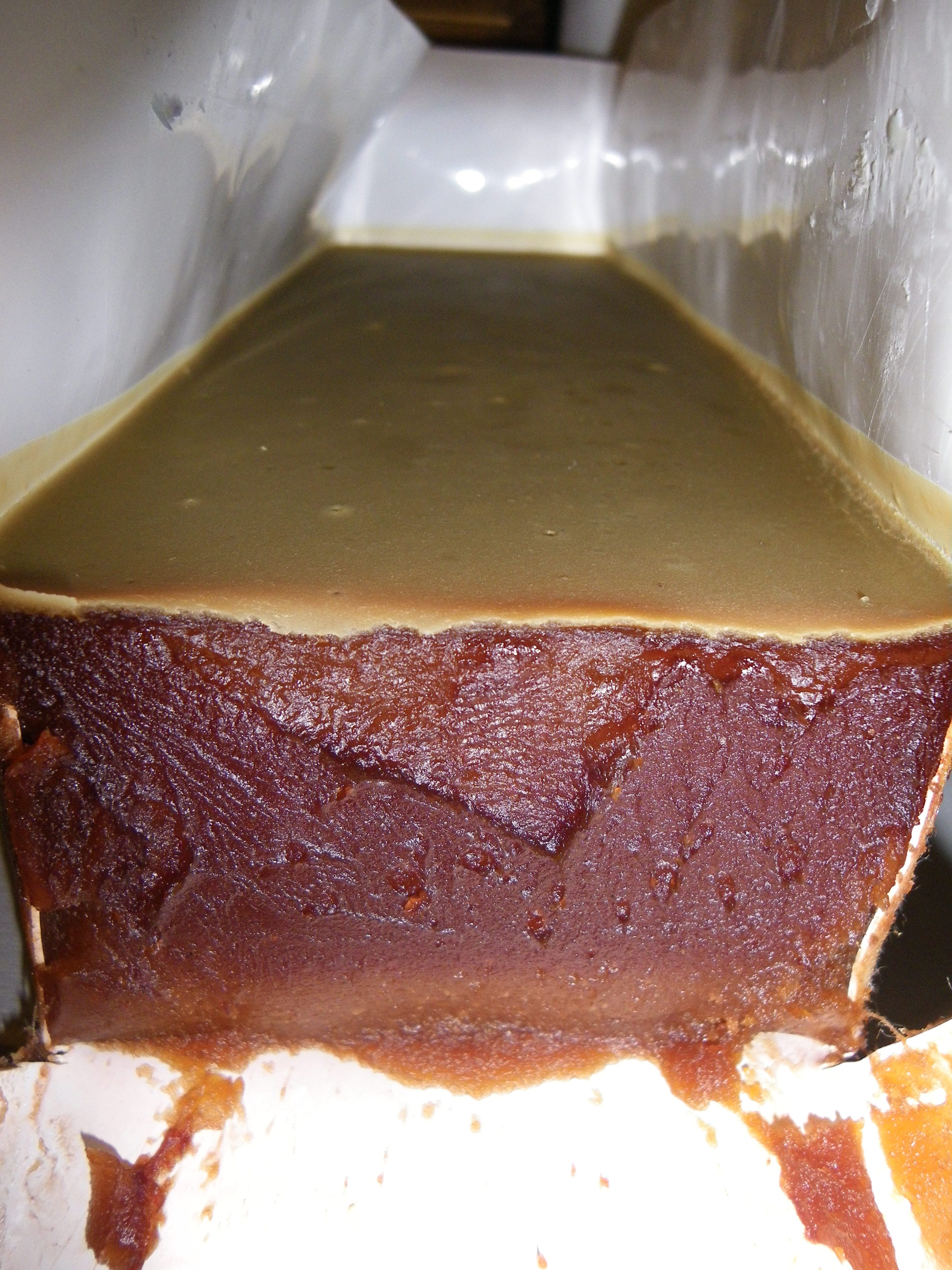 Similar to the soap that was left in the bowl

I put the soap in the freezer for a while to be able to peel the plastic sheet of it. 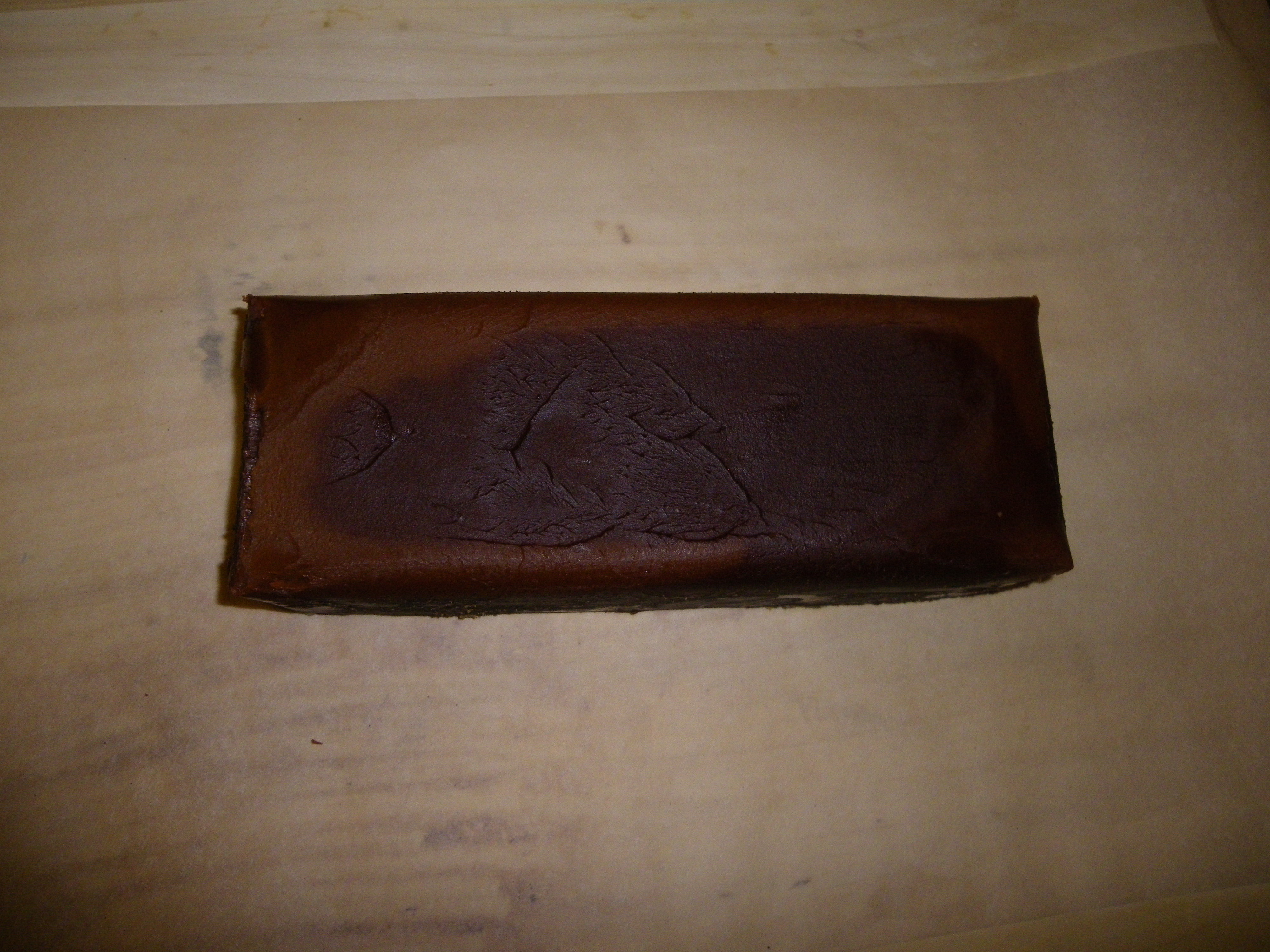 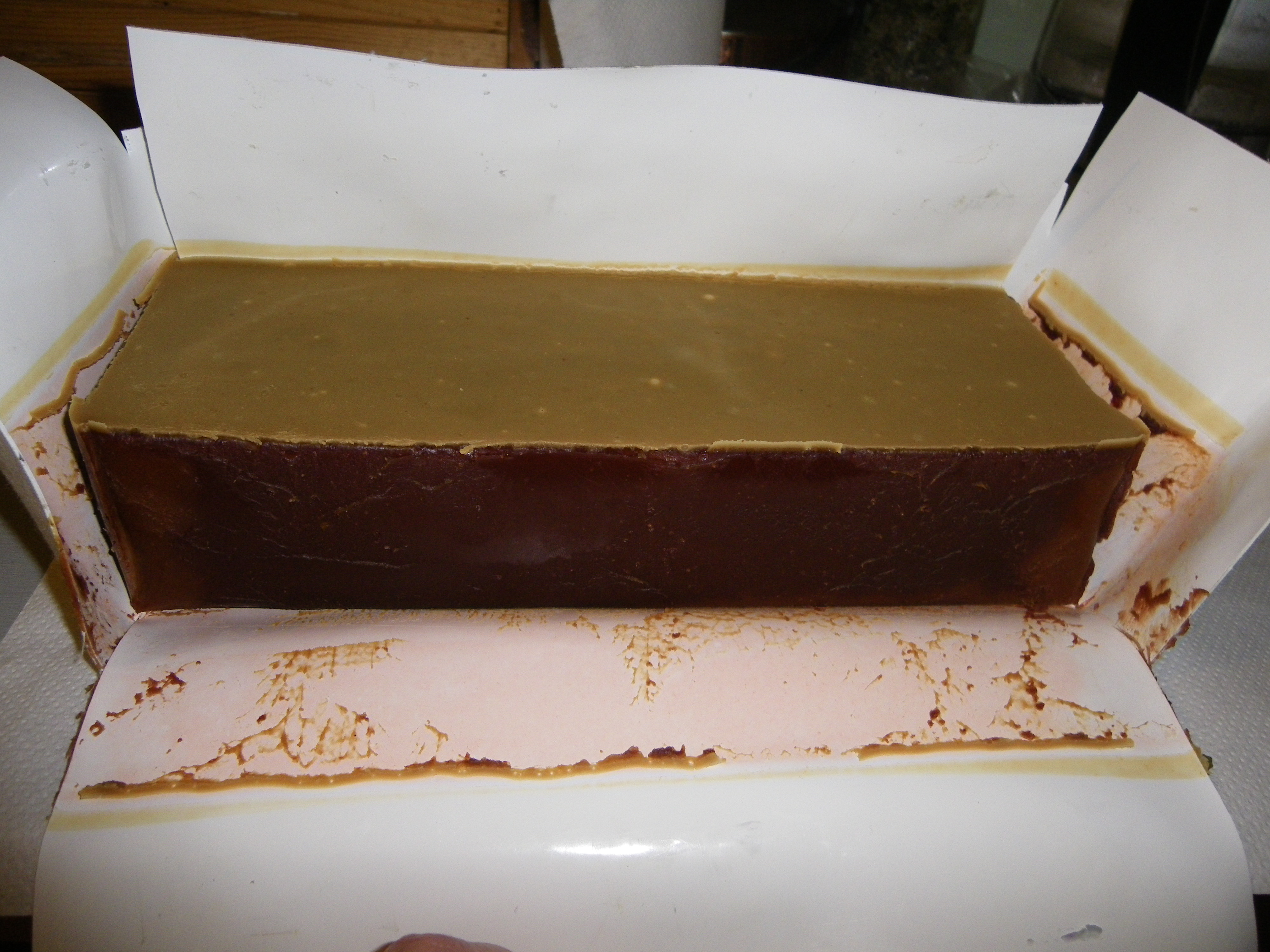 How was soap after 24 hours

I measured pH of non-gelled soap left in the bowl as well as gelled soap from the mould. The difference in pH was enormous: 10.7 for gelled soap and 12.1 of the ungelled soap!

This is a nice example / proof  of how gel phase accelerates soapmaking reaction.

Finally, I cut soaps into bars: 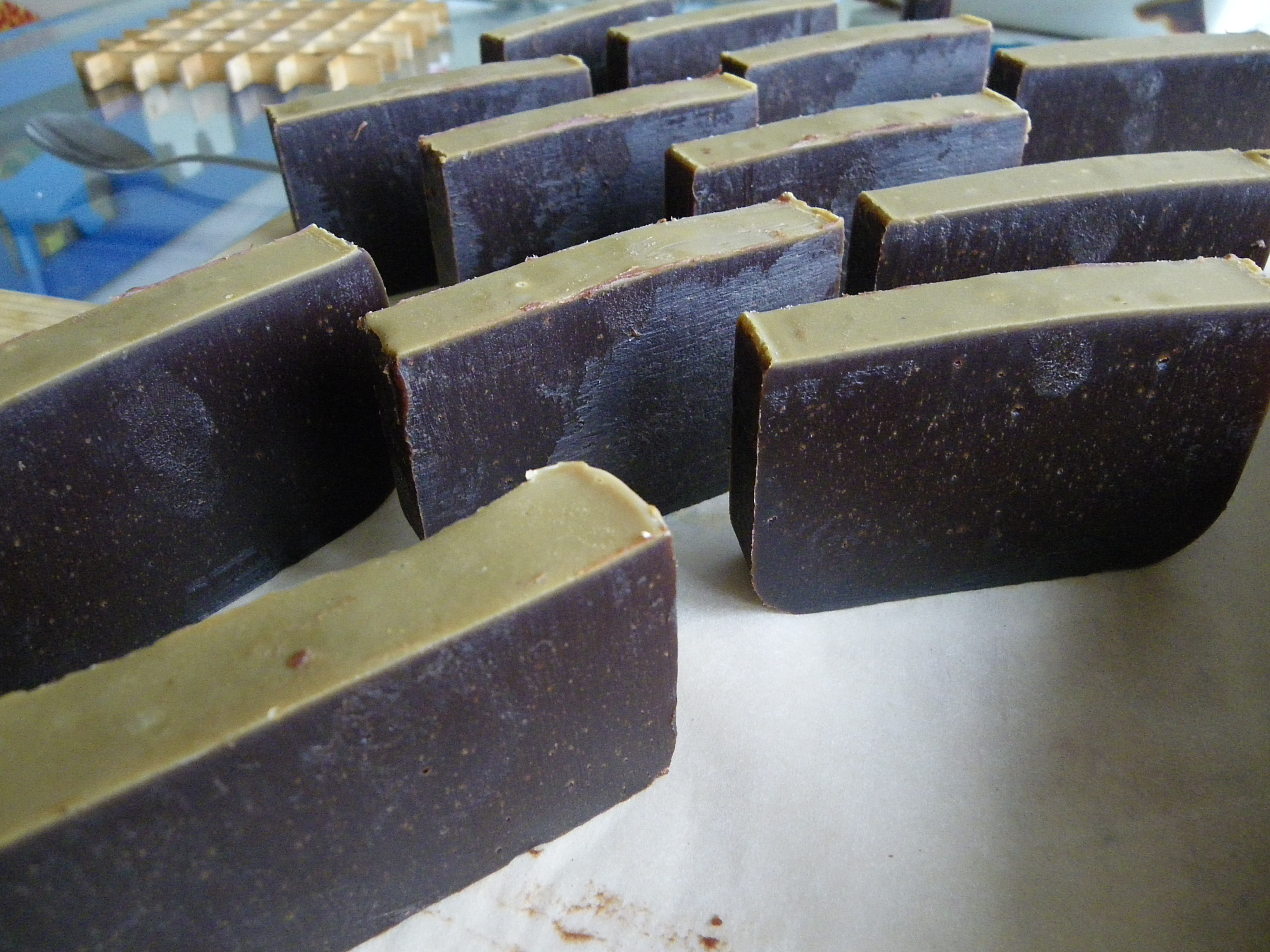 Two days later, because gelled soap is soft and gummy for a long time, I stamped the soap with golden mica. 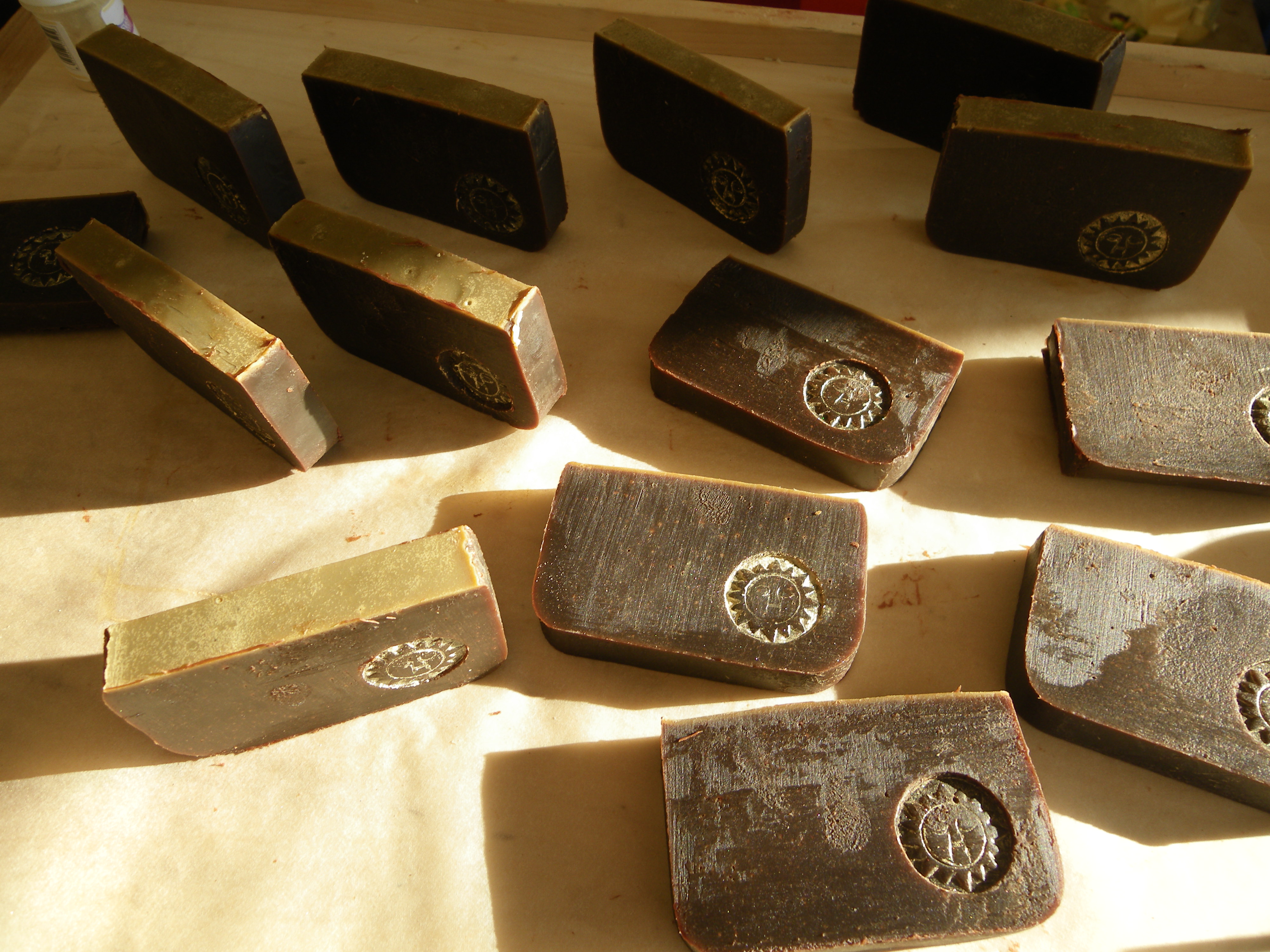 The soap has very good lather (thanks to castor oil), is very silky (thanks to gel phase) and thanks to salt, not too soft.

Have you ever made rose hip soap?

This entry was posted by evik on February 9, 2014 at 00:06, and is filed under soap recipes, soapmaking. Follow any responses to this post through RSS 2.0.You can leave a response or trackback from your own site.